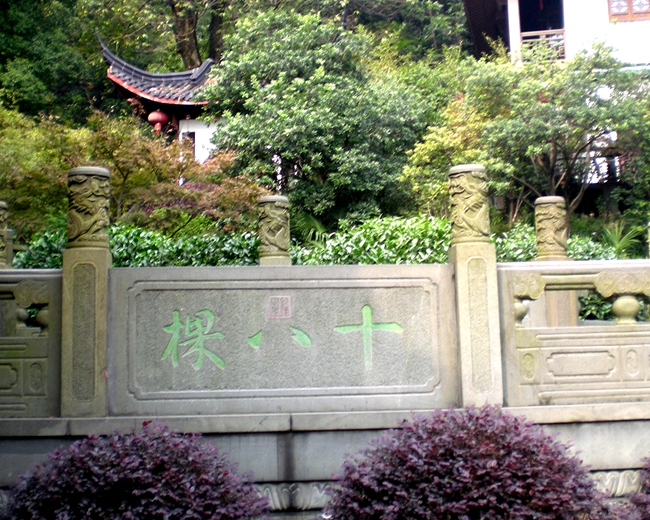 The most famous tea garden in the village is Longjing Imperial.

Located at the rear of the village, the tea garden is surrounded by incredibly idyllic terraces roamed by straw-hatted harvesters who pick each leaf by hand.

The grandiosely named garden is something of an out-of-the-way tourist spot, but that in no way diminishes the sheer beauty and tranquility of the place. 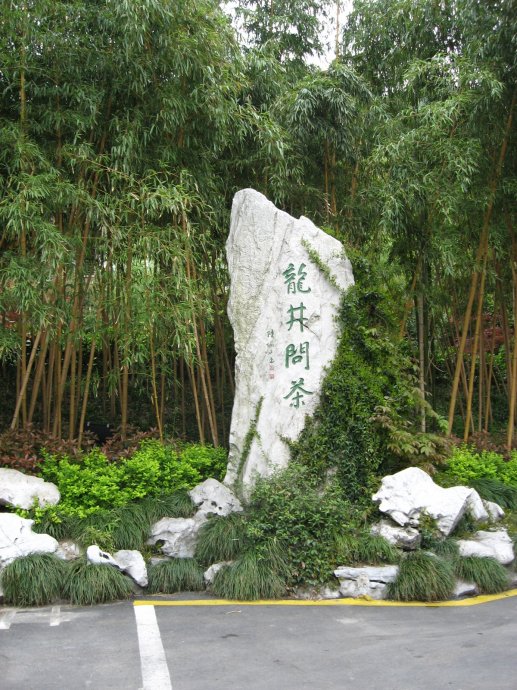 Legend has it that the land occupied by Longjing Imperial was one of Qianlong’s favorite stops on his several trips to Jiangnan, and the Qing Emperor even planted 18 tea trees on the hill by himself.

Upon entering the garden, you'll find yourself at the foot of the hill into which the entire garden has been landscaped.

The outdoor space is flanked by a giant teapot and a pair of traditional-style buildings looming overhead, stone stairways crisscrossing upwards and beckoning the visitor to ascend further.

Once inside, you'll find the grounds very thoughtfully laid-out, with narrow stone paths twisting alongside creeks and under traditional wooden walkways. All of these are amidst heavily forested environs that make visitors feel as if they're wandering through somebody's private hideaway.

The origin of Longjing tea's name, the dragon well, is near the entrance. Although this is not the exact well the green tea was named after -- the tea took the name of the whole village -- the resort uses the spring water from the well to irrigate its renowned tea leaves.

Follow the paths back as they wind up steps and into bucolic tea plantations that just simply scream to get lost in.

Longjing tea, also known as Dragon Well, is favored by many, and have earned its reputation as the imperial tea due to it being enjoyed and praised by the royal family, and notably the famous Emperor Kangxi, who ruled during the Qing Dynasty.The tea continued to be appreciated by Emperor Qianlong, the grandson of Emperor Kangxi. Longjing Imperial Tea Garden offers an insight into the origins and types of Longjing Tea. 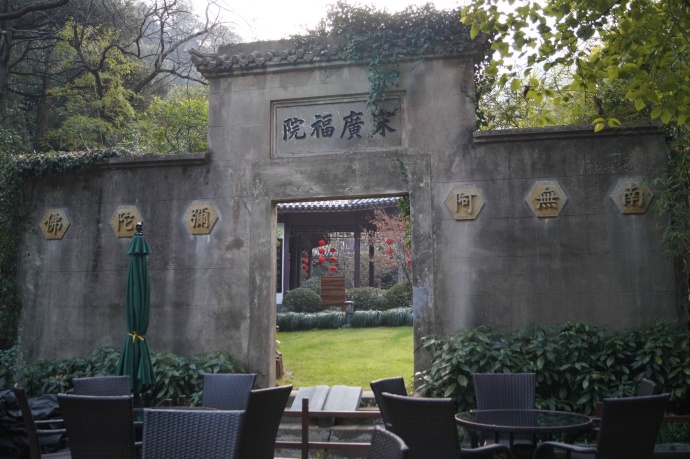 The tea has a long history spanning more than 1000 years. The earliest record of its existence can be found in the book named “Chajing” (Classics of Tea), the first book on tea in the world, written by the tea-expert Lu Yu in the Tang Dynasty (618-907). Knowledge of the tea began to spread all over the country in the Yuan (1271-1368) and Ming (1368-1644) Dynasties. Longjing Tea was granted the status of Gong Cha, or Imperial Tea, in the Qing Dynasty (1644-1911) by Chinese Emperor Kangxi, thus the fame of Longjing Tea became widespread throughout the country.

Being famous for its unique fragrance and flavor, slender strips of tea leaves in bright green liquid, Longjing Tea is flat and smooth in shape with luster. The taste of authentic Longjing Tea is brisk, refreshing, smooth, and mellow and has a sweet aftertaste. However if the tea is of poor quality, it will taste astringent and bitter.

Longjing Tea contains Vitamin C, amino acids, so it aids one’s health in many ways regardless of your age. It is used to deter food poisoning, refresh the body, prevent cavities, fight against viruses, control high blood pressure, lower the blood sugar level, and to prevent cancer.

Next: Viewing Fish At Flower Pond