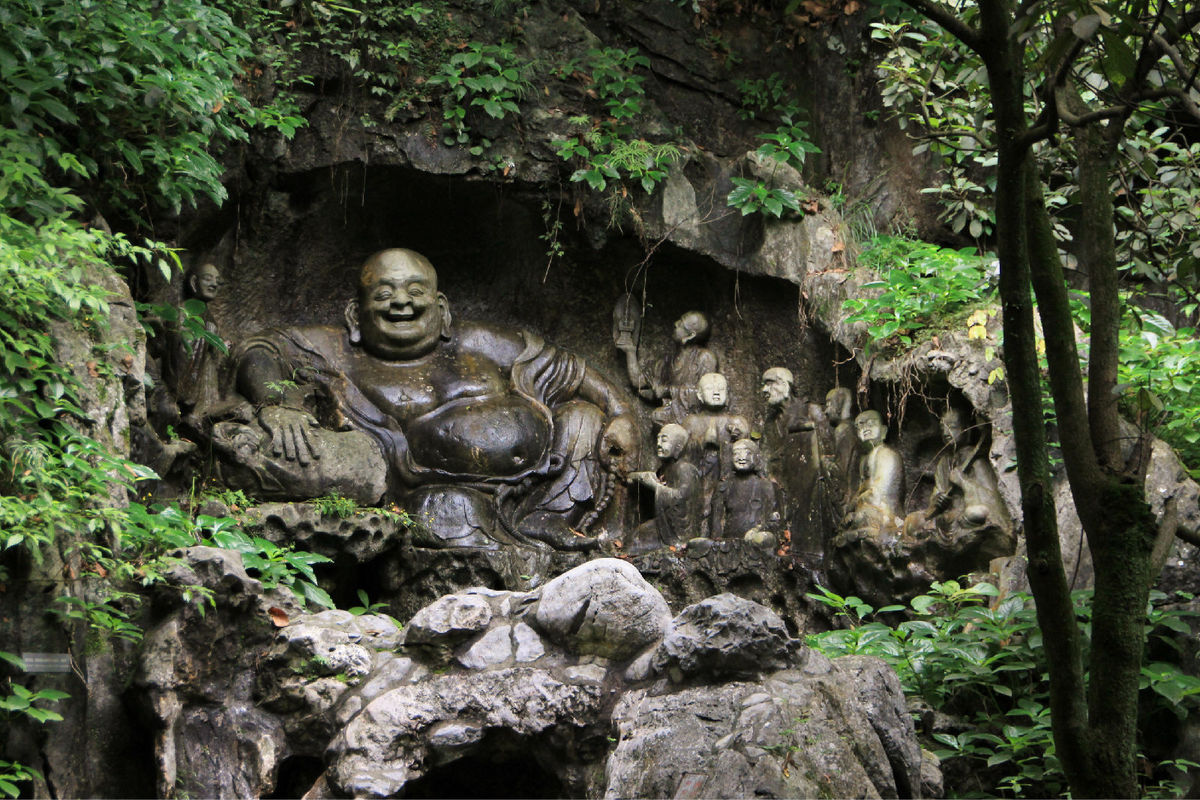 The Fei Lai Feng is situated in the east of Ling Yin Si. Isolated from others, its stone quality is totally different from that of surrounding mountain groups. It is 167 meters high, on the peak of which there are many grotesque stones in the shapes of charming dragon, prostrate tiger, walking elephant and scared ape. The color of the stones is also queer, green touched with purple, shining and slippery to the full tastes of visitors.

Fei Lai Feng, 209 meters (about 700 feet) tall, is a pure limestone mountain that is very distinctive from the sandstone mountains around it. Large stones scattered along the peak are said to resemble animals like a flying dragon, a running elephant, a crouching tiger, and a fleeing monkey.

On the other side of the peak, a pavilion named Cui Wei was erected to immortalize the national hero Yue Fei. This man contributed greatly in the war against Jin Tribe during the Southern Song Dynasty (1127-1279).The pavilion was destroyed many times before the large restoration of 1942. The current pavilion keeps its old face with fresh paint. 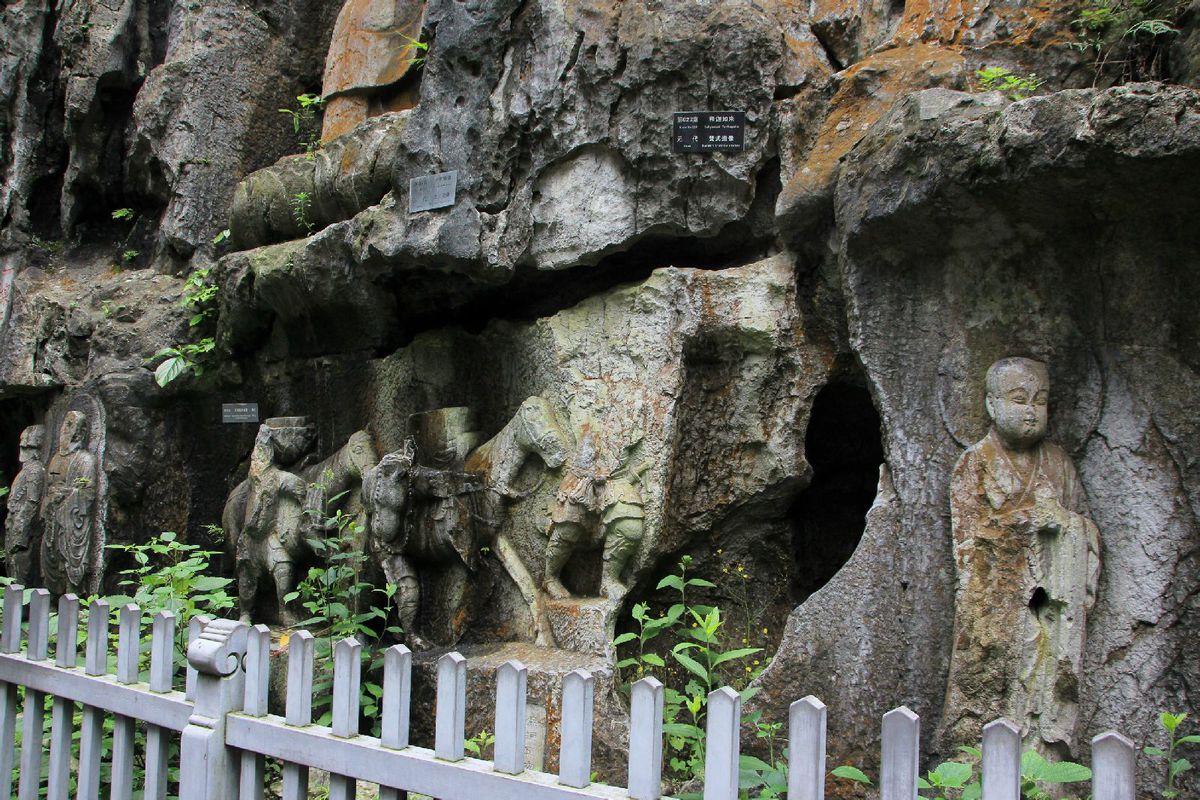 The biggest Buddha image of the Fei Lai Feng is Maitrey with cloth bag on shoulder, otherwise known for Budaha of joy, with an exposed breast and belly, it sits on a cliff along the brook, laughing since the Northern Sung (960-1127). There is also an image of King Da Li Ming with three heads, eight arms, and stripping to the waist, colorful crown on his head and a pearl and jade necklace hanging around his neck, a superb example of the statues of the Yuan Dynasty.

In 1993, a new site by the name of "China Grotto Art Garden" was set up around the Fei Lai beauty spot. Thousands of professionals and aficionados in the fields of engraving and grotto research flock to this place to study the unparalleled Chinese classical rock carvings.

Apart from the magnificent caves and grottos, the Peak Flown from Afar has a variety of odd stone figures, such as dragon, elephant and tiger shapes, which were naturally built. Thus the place is like an extraordinary zoo of stone carved animals. Ancient trees are seen all around the peak too. Su Dong

The well known Chinese poet Su Dongpo once said that "One loves the scenery of the Peak Flown from Afar of the Lingyin Temple best, though beautiful landscape is everywhere."(溪 山处处皆可庐，最爱灵隐飞来峰) A lot of treasures are waiting for you to explore and discover, and you will have a happy trip here. The Peak Flown from Afar has become one of the most frequently visited attractions in Hangzhou. It is welcomed by tourists and Buddhist followers at home and abroad.
Among all the mountains around West Lake, It is the one most likely to simulate the imagination and make one reluctant to leave. welcome to Hangzhou,welcome to Feilaifeng!!

Story about the Peak Flown From Afar
According to folk legends, there used to be a little peak which can fly in E’Mei Mountain, Sichuan Province. It caused a great deal of damage and no one was able to control it.

Back then, an immortal disguised himself as a monk in Lingyin Temple. He didn't follow the monastic rules for Buddhists and spoke nonsense all day long. Hence, the local then called him “Crazy Monk”.

One day, Crazy Monk learnt the strange peak would fly to Hangzhou and drop onto a village in front of Lingyin Temple at noon. He was so concerned about the safety of villagers that he informed the villagers from door to door instantly. He urged the villagers to pack their things and evacuate. But no one seemed to believe him. The villagers thought it was just one of his nonsenses and laughed that how can such a thing heavy as a peak can fly!

With the sun rising higher and higher in the sky, there was not much time left. Crazy Monk got more and more anxious and was not able to do a thing. Then an idea occurred to him. It’s so happened that on that particular day, there was a couple getting married. “Crazy Monk” sneaked into their wedding ceremony and without a word, he picked up the bride and threw her on his shoulder and fled. Learning “Crazy Monk” had stolen the bride, all villagers put their work aside and walked out of their door to rescue the bride except the mean landlord.

After the villagers having chased him to the place miles away from the village, Crazy Monk stopped and let the bride down. Villagers had hardly approached Crazy Monk when a thundering sound behind caught their attention. It turned out that a peak did land on the village. People then realized Crazy Monk did all this to save everyone's life and turned to thank him. However, the mean landlord wasn’t so lucky and was crushed to death. When people was about to leave, Crazy Monk suggested engraving 500 arhats on the peak to lock it there in case that it may fly elsewhere and cause damage. Everyone was in favor and spent a night engraving the 500 arhats. Since then, the flying peak has not moved even an inch. And the 500 arhats has become one of the highlights of the peak. For the peak was flying from E’Mei Mountain, it’s then named the Peak Flying from Afar.

Story One: Like all the most popular tourist attractions in China, there's a host of conflicting stories about how the towering Feilai Feng (Fēilái Fēng, 飞来峰) got its name. Translating as the "Peak Flown From Afar," the most popular legend tells of an Indian Monk who chanced upon the 209 meter rock some 1,600 years ago, and assumed it must somehow have come from India given how similar it was to the peaks in his homeland. Whatever the truth in that, it's certainly a rather special place today, and affords wonderful views over the surrounding countryside (if you can see past the hordes scrambling up there with you). 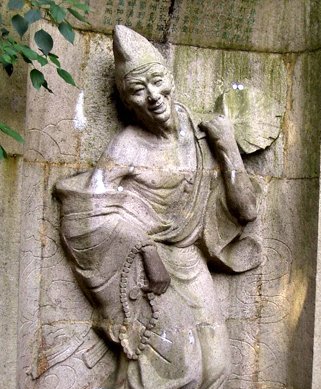 Story Two: It was said that one day, Monk Ji Gong (济公, also called Dao Ji) of Lingyin Temple suddenly predicted there would be a peak flying from afar. At the time, the front of Lingyin Temple was a village. Monk Ji Gong was worried about the arrival of the unknown peak would cause casualty and he ran to the village to warn the villagers of what might happen and advised them to leave as quickly as possible. Ordinarily, in the eyes of villagers, Ji Gong acted like a mad monk and preferred to play tricks on them. They mistook Ji Gong’s advice as a trick again; hence nobody took it seriously, which made Monk Ji Gong worried. At this time, He rushed into a family where there was a wedding ceremony and took the bride rapidly out of the house. The villagers found the monk dared to get the bride away from the ceremony and hell-for-leather went after him. Suddenly the gale begun and the whole sky turned dark when they were chasing Ji Gong, and with a sound of Hong, a peak fell down to the front of Lingyin Temple. And the peak did not destroy the village at all. The villagers got aware that Monk Ji Gong saved them all. And this peak was Fei Lai Feng, the Peak Flown From Afar.

Tour The Fei lai feng(Peak Flown From Afar) with Hangzhou Private Tour
We design private and tailor-made Hangzhou Tours customized to your style of travel at affordable local prices.  We will provide a private & spacious car and a local professional tour guide with over 5 years guiding experience only work for you or your group. Transport, ticket, and dining (We find the most authentic dishes popular with locals) all we will arrange for you according your requirements. Please check our most popular Hangzhou Tours including The Fei lai feng(Peak Flown From Afar) as below: