Your Location: Home > Tickets Booking > Night Show of Romance of the Song Dynasty

Night Show of Romance of the Song Dynasty 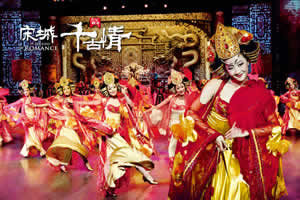 Welcome to hangzhouprivatetour.com, we are the source in Hangzhou and we are the official ticketing agent of Romance of Song Dynasty Show. Buy tickets online, Unbeatable Price! Easy to Pay! Easy to get the ticket!

Give us one night, we'll give you one thousand years. Romance of the Song Dynasty is the most popular evening show in Eastern China cities. The grand stage show will take you back to thousands years ago to explore the culture and history of this historical city.

The Romance of the Song Dynasty is a large stereoscopic musical drama which was wholeheartedly made by Song Dynasty City. The drama adopted the old stories and legends in Hangzhou City, integrated the world music with acrobatic art, applied the high technology to create a dreamy poetic imagery. You can have a strong visual impact. Till now, the drama has received more than ten million audiences and wins a large outpouring of favorable comments. It is a must for the visitors coming to Hangzhou.

The Song Dynasty ruled China from 1127 to 1279, moving their capital to Hangzhou in 1129. The Song Dynasty was a period of prosperity in China. Marco Polo is believed to have visited China during this time and was amazed to see huge cities of over a million people, vast amounts of commerce and busy river and canal traffic. In dedication to its rich history, 50 million RMB was invested to set up "the Song Dynasty Town" in Hangzhou. The town can be divided into six parts, Reappearance of the Painting "Riverside Scene on Qingming Festival", Jiulong Square, Song Dynasty Town Square, Fairy Hills with Wonderful Towers, Song Palaces and the Romance of the Song Dynasty, among which the Romance of Song Dynasty is the most amazing part in the whole park.

Generally, travelers in Hangzhou must go to four destinations: West Lake, Tea Plantation, Temple Complex and Song Dynasty Town, while The Romance of the Song Dynasty is the easy and convenient way for visitors to understand the all-sided charm of tangible and intangible heritages comprised of legend, myth, love stories, tradition, history and classical lifestyles. With 120 square meters LED screen, 300 square meters water arena,3000 square meters scene of misty rain and 100 meters time tunnel, the spectators may be impressed as if they live one thousand years back. The performance together with Moulin in Paris of France and O Show in Las Vegas, are “World’s Top Three Famous Shows”. The visitors who saw this life-like performance are much impressed.

The main show is divided into four scenes of the Southern Song Dynasty:

The second scene is "The Banquet Dance in the Song Palace", during the Southern Song Dynasty Hangzhou was served as the capital city for the whole China and Hangzhou reached its height during this dunasty. In this scene, all the actors and actress with exceptional traditional costumes dress up like emperor, empress, palace officials, and palace entertainers, all dancing to ancient Chinese music. The dance present tourists the living scene in the ancient palace.

The third scene is "Against Jurchens Battle", this scene is performed in honor of the much-respected General Yue Fei, a renowned general of the Song Dynasty who fought against Jurchens invaders from the northern part of china.

The next scene is "the Remarkable West Lake and its Beautiful Tales", legends like "The White Snake Turned Lady " and "The Butterfly Lovers" are vividly performed by the talented ballet dancers, accompanied by sweet or sorrowful music. In this scene of love, betrayal, and sacrifice, there are water fountains, laser lights, mist, and even drizzling drops of water falling all over the theatre like rain. The legends are brought to life. And this scene will makes you further understand that Hangzhou is the love capital in China.

The final scene of the night is "the World Meets Here & Hangzhou Essence", with dances from all over of Asia to show that the world is big falimy.

◆ "Child Price", as shown in the above table for child over 1 meter and under 1.3 meters, seat is available.
◆ No charge for children under 1 meter in height, provided that the child does not occupy a seat. If the child occupies a seat, the price is 75% of the adult ticket price .
◆ Full fare must be paid for children over 1.3 meters tall.
◆ Child policy is depending on child's height not on child's age.

How to Book the Show Ticket * Book Normal Seats First Show
1. Send us Inquiry E-mail for booking
2. Pay by PayPal/Western Union...
3. Get the "Booking Confirmation" email
4. Get the ticket at the entrance of the show place or delivery to the address you provide 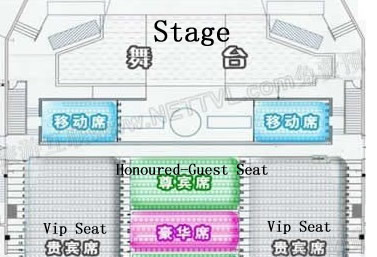 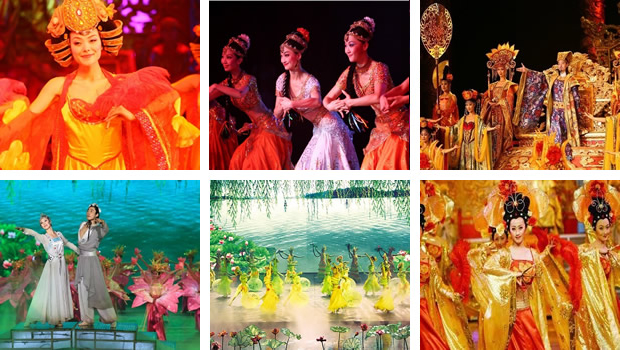 According to the change of the territory and capital, Song Dynasty was divided into Northern Song (960 – 1127) and Southern Song (1127 – 1279). With a prosperous economy and radiant culture, the Song Dynasty was considered as another period of 'golden age' after the glorious Tang Dynasty (618 - 907).In 960, Zhao Kuangyin, the commander of the Imperial Guards serving the Later Zhou Dynasty (951 - 960), seized power through a coup in Chenqiao (Chenqiao Town of Henan Province).

How to Book the Show Ticket?

Pay by PayPal
PayPal provides a way to send money to anyone in the world who has an email address. But, first you have to register your details (including Credit Card details) with PayPal. As part of this process you decide on a password so that you are the only one who can access your PayPal account. For more details, plz refer to www.paypal.com

However the 4% transfer fee charged by PayPal will be added. That is, you have to pay: Quotation Amount + 4% serveice fee

Pay by Western Union
Western Union http://www.westernunion.com
Advantage:Cost only several minutes and much faster than to do so with banks in several days.
You can find a local agent near you from Western Union to deal the transfer.

KEY:The switched sequence for First Name and Last Name makes Western Union payment fail.
Please send the Western Union Payment Control Number to us via email or fax after the payment, and inform us of the sender's full name and city/country, thank you.

Pay upon Delivery and Get the Ticket (in Hangzhou)
If all options do not suit you, pay upon delivery in Hangzhou should be your last choice! We will send one person bring you the ticket and wait you at the entrance of the show place. It's free for delivery!

1. Cancellation due to irresistible cause like Bad Weather, Natural Disaster Coverage, facility is closed due to unforeseen circumstances, and Political Reasons.

If the show is cancelled due to bad weather conditions, power failure, major show facility breakdown, strikes, civial unrest, hurricanes, fires, earthquakes, governmental urgent bookings etc. and you had paid for prior to the event, you will receive a full refund. Hangzhouprivatetour.com cannot accept any liabilities caused by bad weather, power failure, show facility breakdown, or those political reasons. We will do our very best to contact you beforehand and as soon as we are made aware of any such cancellation.

1) . 6 hours prior to the show: No cancellation fee if you change or cancel the booking. However, the refund to your PayPal account will deduct the transaction fee and our service fee.
2) . Within 6 hours before the show: No refund, since the theatre will charge us 100% of the ticket cost.