Huangshan, known as Huizhou in ancient China, is located in the south of Anhui Province. Food in Huangshan City belongs to Huizhou cuisine, called Hui cuisine, which is one of the eight major distinguished regional cuisines of China. It dates from the South Song dynasty in Shexian County (the Huizhou Prefecture in ancient times).

Anhui Cuisine features an elaborate choice of ingredients, most of the ingredients of Anhui cuisine are from the mountain Huangshan, such as pangolin, tealeaves, stone frog, dates, bayberry, mushroom, bamboo shoot, games, etc. It’s also characterized by cooking all kinds of dainties and with the strict control of cooking process, doing well in roasting, stewing, braising, and quick-frying. In addition to its incredible natural beauties, Huangshan also offer various delicacies to satisfy visitors' taste buds, people in Anhui feel that appearance is equally as important as taste when it comes to cooking. Generally Hui Cuisine is generally slightly spicy and salty. Hui cuisine also features for its use of wild herbs, from both the land and the sea, and simple methods of preparation. Anhui cuisine consists of three styles: the Yangtze River region, Huai River region, and southern Anhui region.

Anhui has ample uncultivated fields and forests, so the wild herbs used in the region's cuisine are readily available. There are some famous local dishes as below: 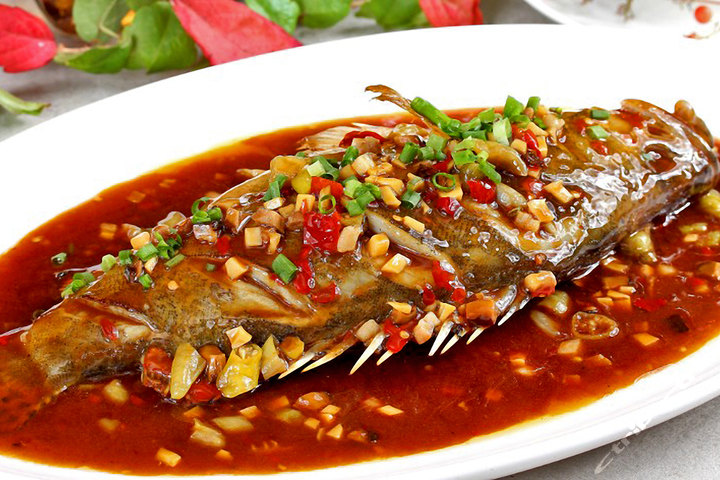 Mandarin Fish is a representative dish of Anhui cuisine, which is featured with the mandarin fish living in Xin'an River that flows through Huangshan City, which is a little smelly s but tastes good. After being salted for seven day, the smell like the stinky toufu, then fried in oil and braised with lettuce. With the unique cooking techniques, meat and bones are separated when the dish is made. The dish not only maintains the original flavor of mandarin fish, but is well-seasoned with special ingredients, which endows it the appetizing flavor. Once you dare to sample a little, you cannot help to have more because of its appetizing flavor.
The dish has a history of more than two hundred years and has maintained its popularity, with the name mandarin fish appearing in many pieces of Chinese literature. 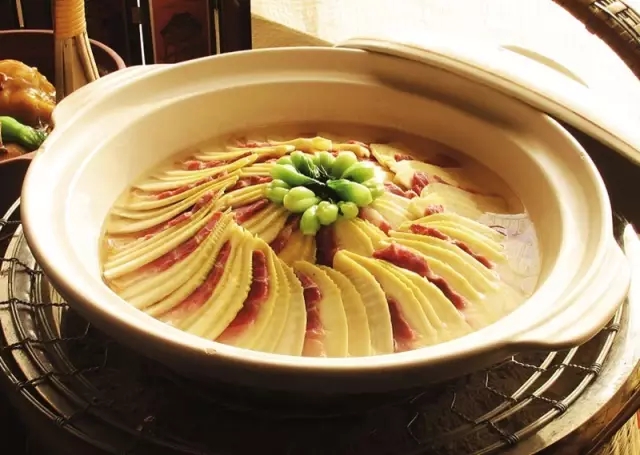 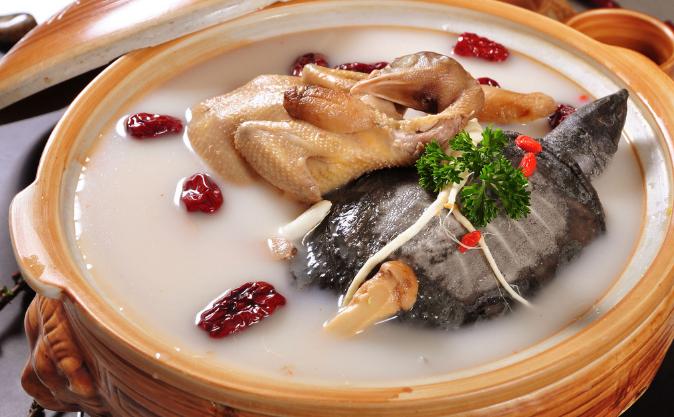 Stewed Turtle in Clear Soup is another famous traditional dish in Anhui Cuisine, also known as Ham and Turtle soup. It uses soft-shelled turtles from the mountainous areas near Huangshan. The dish's main ingredients consist of an entire soft shelled turtle, ham, bamboo shoots, garlic, ginger, black pepper, cooking wine, crystal sugar and salt. The ingredients are all stewed together over a charcoal fire, the turtle meat is well-mingled with the flavor of sausage, making the soup thick and fragrant, taste delicious and inspire people. Famous poets and scholars in ancient times took special trips to Huizhou to taste this delicious dish. From then on, this traditional course is well known throughout China. 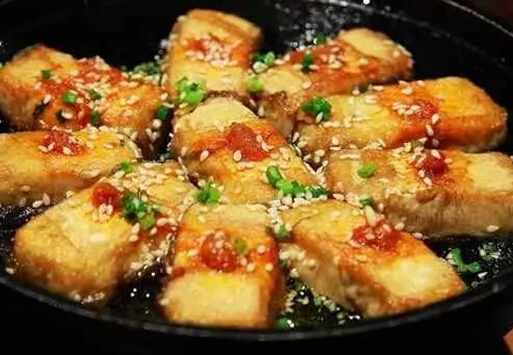 Mao Bean Curd is also called Huizhou funky bean curd. "The taste is much better than the smell," people say, which means that although it smells strongly, it has a very light and delicate flavor. It’s fit to eat in four seasons, and suitable for serving in feast too. Most visitors to the Huangshan area are scared off by the smell, and it may seem a little inconvenient to eat Mao bean curd on a booth for the first time(locals don’t use bowls, standing beside the pan), but they are missing a wonderful dish. It's a traditional snack in Huizhou (Huangshan Prefecture) and an acquired taste. It could be considered as the Chinese alternative to a Stilton or Camembert cheese.
Rumored to have been first created during The Qing Dynasty (1644-1911), this dish was enjoyed by the Kang Xi Emperor, making it famous throughout China. 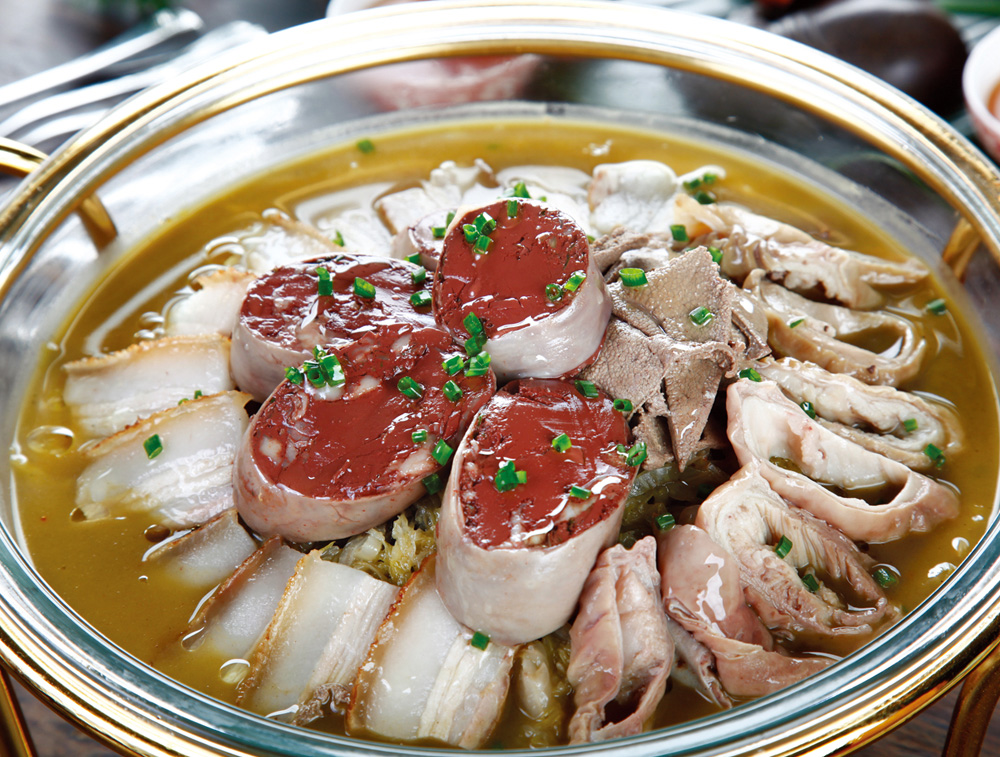 Li Hongzhang Hotchpotch is also a popular dish in Huangshan, which was given to Li Hongzhang. During the Qing Dynasty (1644-1911), Li Hongzhang was a top official in China's capitol. He paid a visit to America, where he held a banquet for American dignitaries. His chefs found it’s hard to cook Chinses cuisine due to lack of many ingredients, which are used in dishes very often. Li Hongzhang suggested the chefs take whatever ingredients they had available and mix them together in a stew. And the dish was loved by guests. Upon returning to China, Li Hongzhang served it to his fellow officials and it became a hit and very popular. This dish contains squid, tofu, sea cucumber, ham, mushrooms, chicken, and many other ingredients refer to your reference.. It truly is a hotchpotch. 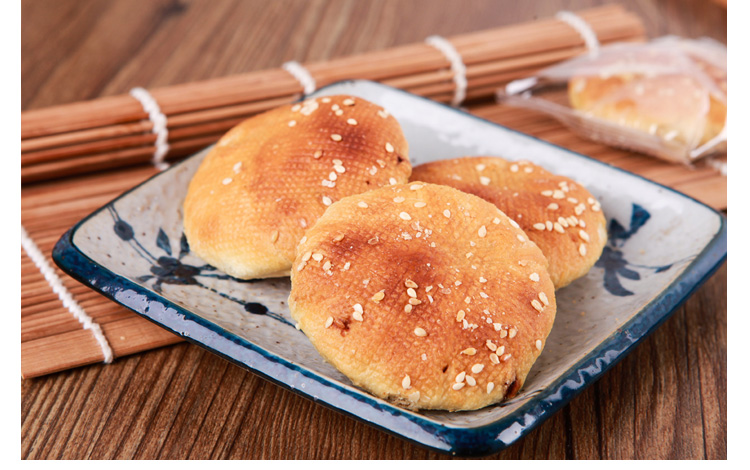 Yellow Crab shell Cake is a famous local snack, it’s in fact a meat-vegetables-filled pastry. Yellow crab shell cake uses first-class funky dried vegetables and fresh fatty meat as fillings. It's slowly roasted in a specially-made oven with a charcoal fire until it reaches the golden yellow color of a crab shell. Because its color looks like the yellow of a boiled crab shell, it gets the name "yellow crab shell cake". It's an ideal breakfast or snack for tea. 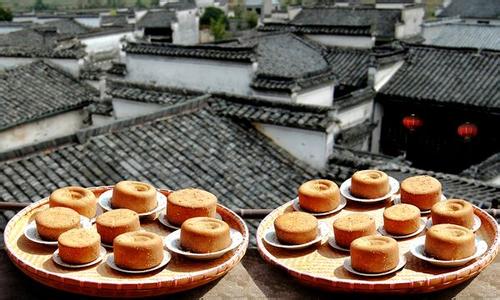 Laba tofu was made into the bean curd with the first-class small soybean, put into the brine until it become salty. And you stir-fired meat or braise soup with Laba tofu, then cooked it tastes quite soft, salty and a little bit sweet. It’s the special snack in Yixian County. It said that on the eighth day of the last lunar month of each year, Yixian people started to make the tofu exposed to the sun. The day, December 8th of the lunar calendar, is called La Ba in Chinese, hence the tofu is named La Ba Tofu. Gradually, it become one of the Huangshan local famous snack.


Lao Jie Di Yi Lou (The First Restaurant on the Ancient Street)
Located at the eastern entrance of Tunxi Old Street, which is a landmark on this street. Featuring traditional Hui dishes, you can not only admire decoration of the unique style, but also enjoy the delicious dishes. Most authentic Hui cuisines are provided here, like Smelley Mandarin Fish, Wenzheng Bamboo Shoot, etc. With resonable prices and clean environment. This restaruant become one of the most popular resturant, which is always full of people.
Average cost per person: CNY80
Add: No. 247, Tunxi Ancient Street, Huangshan City
Tel: 0559-2539797
Time: 11:00-20:00


Hometown of Anhui Merchants
Hometown of Anhui Merchants is another characteristic specialized in Anhui cuisine in Huanghshan. It will draw your attention with its Hui-style architecture and grand decoration at the first sight. Besides inside there is a stage set in the hall, and the tourists can appreciate the local performance with an ambiance of rich local culture while you enjoy the food. The dry bean curd, dried bamboo shoot, egg dumplings and salt-preserved meat are well-worth a taste.
Address: No.14 Xianrendong Road, Tunxi District, Huangshan
Average cost per person: CNY71
Tel: 0559-2358888
Time:10:00-22:00


Tunxi Hui Restaruant(?????)
Tunxi HuiCaiGuan was built in 1933, this restaurant is very simple, but features for Hui cuisine, such as Mandarin fish and the smelly bean curd. Besides the traditional Hui cuisine, it serves international cuisine as well, you will satisfied with the environment while enjoy your food.
Average cost per person: CNY47
Address: No. 59 Huangshan West Road, Tunxi district
Tel: 0559-2937097
Time:11:00-20:00


Meishirenjia Restaurant (????)
Meishirenjia Restaurant located at the entrance of Tunxi Ancient Street, next to the Laojie DiYiLou. This is the Must-have when you stay in Huangshan. It's a distinct restaurant with white wall and gray tile on the right side of the bluestone street, featuring Hui cuisine and many kinds of flavor snacks. Kitchen here is semi-open and you can see how chef prepare and cook dishes.
Average Cost per person: CNY50
Address: No. 247, Tunxi Ancient Street
Average Cost per person: CNY50
Tel: 0559-2512222
Time: 11:00-13:30 Mon-Fri
17:00-22:00 Mon-Fri


Tunxi Ancient Street(????)
Tunxi Ancient Street located at the foot of the yellow mountain where you can find colorful bazaars of local features, which is similar to life style in Qing Dynasty and Ming Dynasty. Now it is also listed as one of China's Top Ten Historical and Cultural Streets. It lined with antique shops, medicine shops, teahouses, restaurants and galleries. Many of these shops have been opened for more than a hundred years, most of which still maintain the characteristic layout of ancient shops. You may see the local traditional curios and handicrafts and it’s an ideal place for you buy souvenirs, ink stones, brushes, local teas, and Mao badges. There are also two well-known museums; The Tunxi Museum and the Wancuilou Museum are worth a visit as well.
Address: The center of the old city district
Transport: By Bus 6 and 12
Time: Around 9:30—21:00

Next: What to see in Huangshan