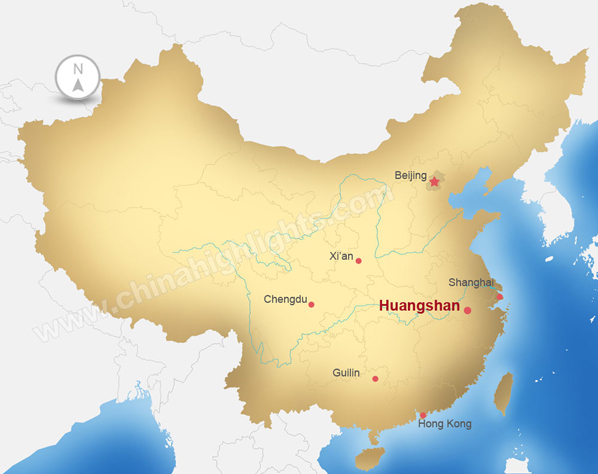 Huangshan is a world famous modern international tourism city in southern Anhui province. It is located at the center of the ancient Huizhou, the sub-transport hub of East China. Huangshan serves as the demarcation point for the water systems of the Yangtze and Qiantang rivers: the rivers north of the mountain empty into the Yangtze through the Qingyi River, and those south of it pour into the Qiantang via the Xin’an River. Huangshan has jurisdiction over three districts, four counties and Huangshan Scenic Zone.

Wu yue is the  collective name given to China’s most important mountains, namely Mt. Taishan in Shandong Province, Mt. Huashan in Shaanxi Province, Mt. Hengshan in Shanxi Province, Mt. Songshan in Henan Province and Mt. Hengshan in Hunan Province. It is said that you won’t want to visit any other mountains after seeing wu yue but you won’t wish to see even wu yue after returning from Mt. Huangshan. This saying may give you some idea of the beauty and uniqueness of Mt. Huangshan. With the beautiful landscapes and many relics, Huangshan is the cradle of the Hui School and one of the three locality studies in China. People living in this area create a great number of cultural and material heritages .Now the population in Huangshan city is about 150 millions .  In 1990 Mount Huangshan was approved by UNESCO as a world cultural and nutural heritage site, and it was selected a world ecopark in 2004.

Huangshan City is also a region with time-honored history and splendid cultures. Shexian and Yixian Counties were established more than 2,000 years ago. In the Jin Dynasty (265 A.D. -420 A.D.) Huangshan City was called Xin' an Shire. In the Song Dynasty ( 960 A.D. -1279 A.D.), the name was changed into Huizhou, the city was famed for its affluent Hui merchants, Xin'an School of painting and carvings, Xin'an traditional medicine, Hui ancient architecture, Hui Cuisine, and Huangmei Opera.

Area: Huangshan City has an area of 9,823 square kilometers.

Climate
The weather here is mild and rainy and has four distinct seasons. The general temperature here is about 15 to 16 temperature.  So thanks to the ideal climate environment. It is said that the best time to climb Mt. Huangshan (Yellow Mountain) is in spring; the blooms of the exotic flowers decorate the hills and slopes with different colors and fragrance. In autumn, the mountains are beautifully decorated with red and purple blossoms while winter leaves the mountain covered with frost and ice with silver boughs and rocks around. Summer beautifies Mt. Huangshan (Yellow Mountain) with pine shades everywhere as the dashing waterfalls contrast with the crystal clear waters from the mountain streams. 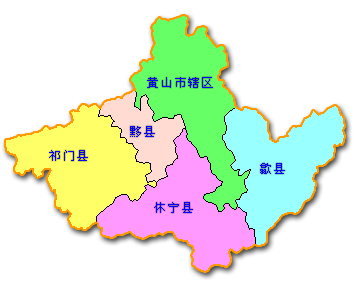