Introdution of Terracotta Army
The Terracotta Warriors and Horses are life size terracotta sculptures created more than 2000 years ago to be buried with Emperor Qin Shi Huang, China's first emperor. They were discovered in March, 1974 by farmers who were digging a well in the Shaanxi Province, about. 99 miles east of the Emperor Qin Shi Huang's tomb at Mount Li in China. The construction of the Terracotta Warriors and Horses began when the Emperor took power. He was only 13 years old, and spent much of his life searching for immortality. His massive tomb encompassed 20 square miles, and thanks to the work of more than 700,000 laborers, his underground tomb included more than 8000 warriors, 670 horses, 130 chariots, and many other sculptures to protect him and entertain him in the afterlife. 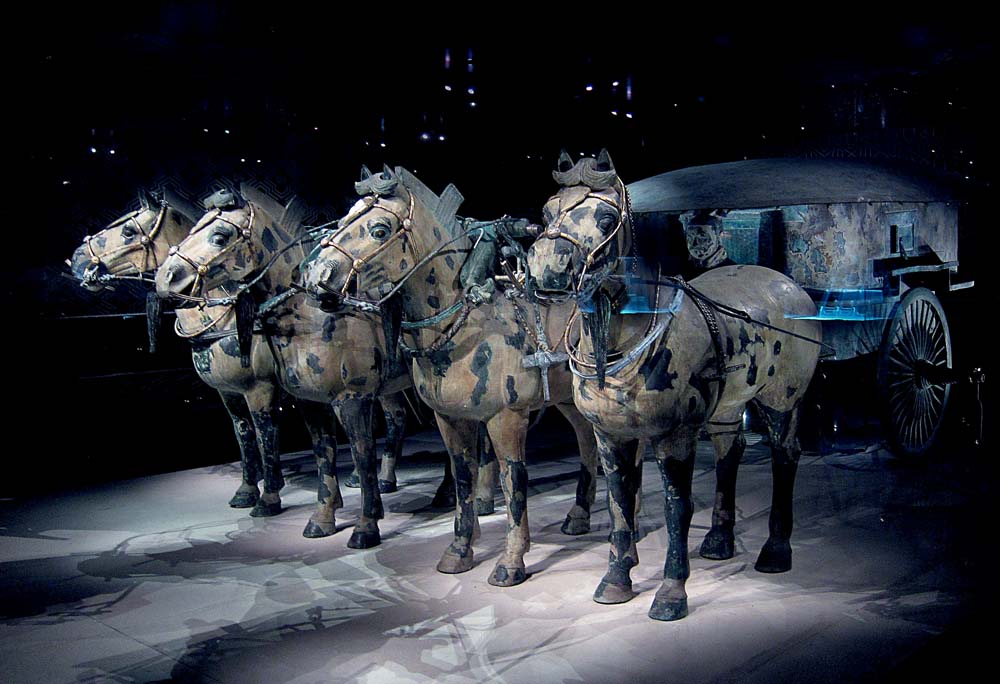 Discovery
The Terracotta Army was discovered on 29 March 1974 to the east of Xi'an in Shaanxi province by farmers digging a water well approximately 1.5 kilometres (0.93 mi) east of the Qin Emperor's tomb mound at Mount Li (Lishan), a region riddled with underground springs and watercourses. For centuries, occasional reports mentioned pieces of terracotta figures and fragments of the Qin necropolis – roofing tiles, bricks and chunks of masonry. This discovery prompted Chinese archaeologists to investigate, revealing the largest pottery figurine group ever found in China.

A museum complex has since been constructed over the area, with the largest pit enclosed within with a large structure. 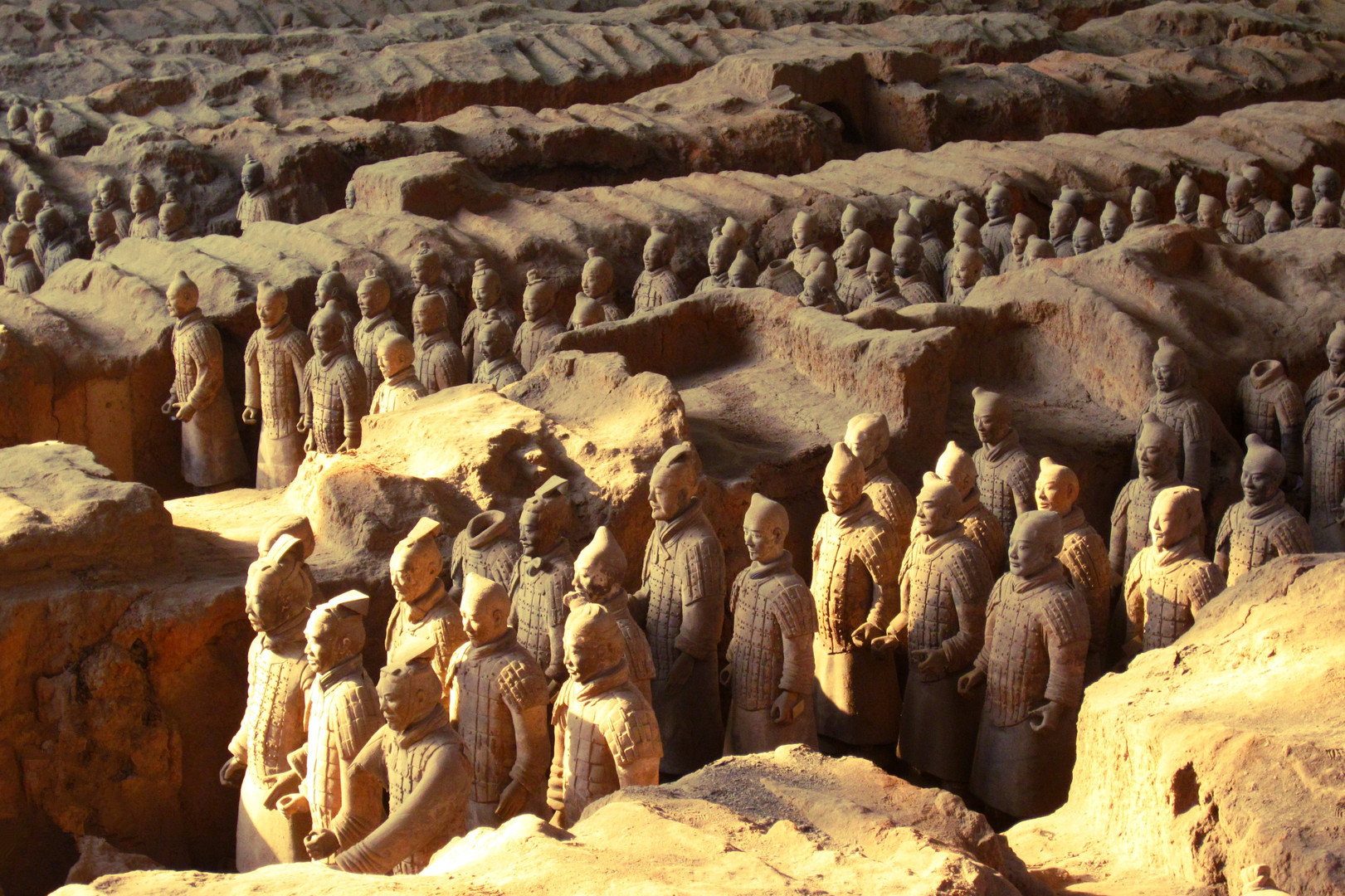 History
The Eighth Wonder of the World was discovered in 1974 by Yang Peiyang, a peasant farmer, whilst digging for a well in the fields at Xiyang. At a depth of 4 metres the farmers found pottery fragments, followed by the pottery torso of a man.

Archaelogists arrived to begin excavations and they discovered that the site consisted of 3 pits, filled with terracotta statues and horses, and was infact the mausoleum of the Emperor Qin Shihuang. More than 8000 warriors and horses were unearthed, along with over 100 wooden chariots. It appears that Emperor Qin ordered his mausoleum to be constructed prior to his death, taking over 20 years to complete.

When the warriors were originally made, each was modelled on a fellow soldier, giving each one its own individual size, style and facial expressions. They were also painted with plant extracts, but on excavations, these colours faded within a few days, reverting the warriors to their original colours.

When the archaelogisits discovered the pits containing the warriors, they found the bodies to be in many pieces, the pits having been raided and ransacked by opposing forces, the weapons plundered and the warriors smashed. Only one warrior, a kneeling archer, remained totally intact. The task of restoration was immense and a project that will continue for many years to come, as many of the lines of warriors are still totally covered awaiting excavation.

The excavation site is now covered by exhibition halls, preventing the modern day pollutants from attacking and further damaging these ancient wonders. This also allows millions of visitors the chance to view this magnificent piece of Chinese History!

Types and appearance
The terracotta figures are life-sized. They vary in height, uniform, and hairstyle in accordance with rank. The faces appear different for each individual figure, scholars however have identified 10 basic face shapes. The figures are of these general types: armored warriors; unarmored infantrymen; cavalrymen who wear a pillbox hat; helmeted driver of chariots with more armor protection; spear-carrying charioteers; kneeling archers who are armored; standing archers who are not; as well as generals and other lower-ranking officers. There are however many variations in the uniforms within the ranks, for example, some may wear shin pads while others not; they may wear either long or short trousers, some of which may be padded; and their body armors vary depending on rank, function, and position in formation. There are also terracotta horses placed among the warrior figures.

Originally, the figures were painted with bright pigments, variously coloured pink, red, green, blue, black, brown, white and lilac. The coloured lacquer finish and individual facial features would have given the figures a realistic feel. However, much of the colour coating had flaked off or become greatly faded.

Some scholars have speculated a possible Hellenistic link to these sculptures, due to the lack of life-sized and realistic sculptures prior to the Qin dynasty. They argued that potential Greek influence is particularly evident in some terracotta figures such as those of acrobats, as well as the technique used for casting bronze sculptures.

Construction
The terracotta army figures were manufactured in workshops by government laborers and local craftsmen using local materials. Heads, arms, legs, and torsos were created separately and then assembled by luting the pieces together. When completed, the terracotta figures were placed in the pits in precise military formation according to rank and duty.

The faces were created using molds, and at least ten face molds may have been used. Clay was then added after assembly to provide individual facial features to make each figure appear different. It is believed that the warriors' legs were made in much the same way that terracotta drainage pipes were manufactured at the time. This would classify the process as assembly line production, with specific parts manufactured and assembled after being fired, as opposed to crafting one solid piece and subsequently firing it. In those times of tight imperial control, each workshop was required to inscribe its name on items produced to ensure quality control. This has aided modern historians in verifying which workshops were commandeered to make tiles and other mundane items for the terracotta army.