Overview of China history
China, one of the countries that can boast of an ancient civilization, has a long and mysterious history - almost 5,000 years of it! Like most other great civilizations of the world, China can trace her culture back to a blend of small original tribes which have expanded till they became the great country we have today. 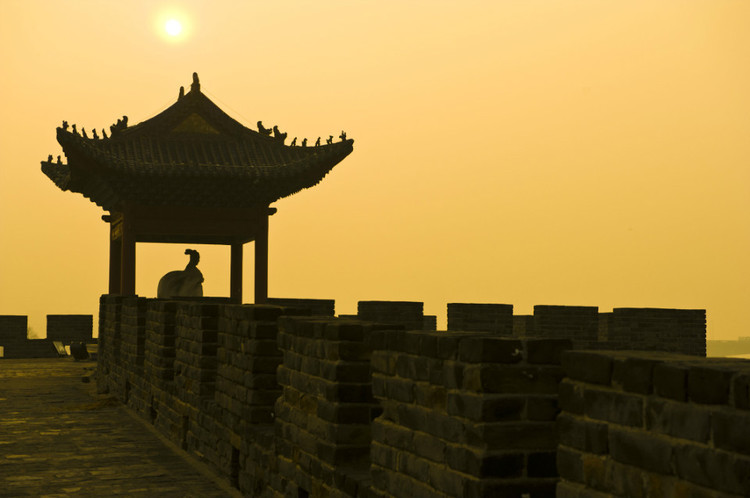 The History of China covers thousands of years. It covers many periods and dynasties. It may be divided into the following parts:

Hunting to farming:About a million years ago, living beings that were earlier forms of human beings had lived in China. These beings were called Homo erectus. Long after, about 65,000 years before, human beings (Homo sapiens) reached China from Africa. 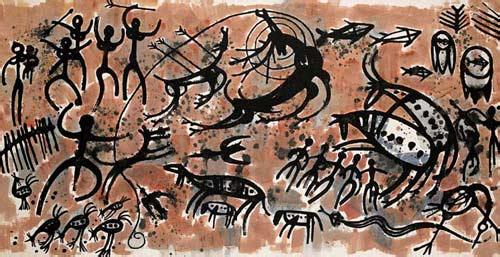 Prehistory:By 5000 BC, people had learnt farming. They had started cultivating millet, a type of grain, and possibly other types of grains. By 2500 BC, Bronze Age had come to China. A ruling class with kings and queens had come into society. 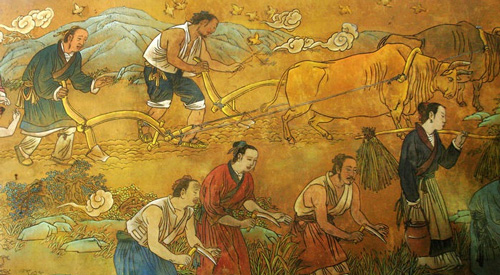 Xia Dynasty:
Xia was the first ruler of ancient china.

One of the Three Dynasties, or San Dai (Xia, Shang, and Zhou), thought to mark the beginning of Chinese civilization: characterized by its writing system, practice of divination, walled cities, bronze technology, and use of horse-drawn chariots.

Zhou (Chou) Dynasty: Western Zhou (ca. 1046-771 BCE), Eastern Zhou (771-256 BCE)
A hierarchical political and social system with the Zhou royal house at its apex: power was bestowed upon aristocratic families as lords of their domains or principalities. Although often compared to European "feudalism," what actually gave the system cohesion was a hierarchical order of ancestral cults. The system eventually broke down into a competition for power between rival semi-autonomous states in what became known as the Spring and Autumn period (ca. 770-475 BCE) and the Warring States (ca. 475-221 BCE) period. It was during these tumultuous times that Confucius (551-479 BCE) lived.

Qin (Ch'in) Dynasty(221-206 BCE）
Created a unitary state by imposing a centralized administration and by standardizing the writing script, weights and measures. Known for its harsh methods of rule, including the suppression of dissenting thought.

Han Dynasty: Western/Former Han (206 BCE-9 CE) and Eastern/Later Han (25-220 CE)
Modified and consolidated the foundation of the imperial order. Confucianism was established as orthodoxy and open civil service examinations were introduced. Han power reached Korea and Vietnam. Records of the Historian, which became the model for subsequent official histories, was completed.

"Period of Disunity" or Six Dynasties Period（220-589 CE）
The empire was fragmented. The North was dominated by invaders from the borderland and the steppes. The South was ruled by successive "Chinese" dynasties. Buddhism spread.

Sui Dynasty China reunified.（581-618 CE）
The short-lived Sui dynasty was a pivotal period in Chinese history. Founded by Emperor Wen in 581 in succession of the Northern Zhou dynasty, the Sui went on to conquer the Southern Chen dynasty in 589 to reunify China, ending three centuries of political division. The Sui pioneered many new institutions, including the government system of Three Departments and Six Ministries, imperial examinations for selecting officials from commoners, while improved on the systems of conscripted army and land distributions. These policies, which were adopted by later dynasties, brought enormous population growth, and amassed excessive wealth to the state. Standardized coinage were enforced throughout the unified empire. Buddhism took root as a prominent religion and were supported officially. The Sui Dynasty was known for its numerous mega-construction projects. Intended for grains shipment and transporting troops, the Grand Canal was constructed, linking the capitals Daxing (Chang'an) and Luoyang to the wealthy southeast region, and in another route, to the northeast border. The Great Wall was also expanded, while series of military conquests and diplomatic maneuvers further pacified its borders. However, the massive invasions against the Korean Goguryeo Kingdom failed disastrously, triggering widespread revolts that led to the fall of the dynasty.

Tang (T'ang) Dynasty（618-906）
A time of cosmopolitanism and cultural flowering occurred. This period was the height of Buddhist influence in China until its repression around 845. Active territorial expansion until defeated by the Arabs at Talas in 751.

Song (Sung) Dynasty: Northern Song (960-1127) and Southern Song (1127-1279)
An era of significant economic and social changes: the monetization of the economy; growth in commerce and maritime trade; urban expansion and technological innovations. The examination system for bureaucratic recruitment of neo-Confucianism was to provide the intellectual underpinning for the political and social order of the late imperial period.

Yuan Dynasty(1279-1368)
Founded by the Mongols as part of their conquest of much of the world. Beijing was made the capital. Dramas, such as the famous Story of the Western Wing, flourished.

Ming Dynasty（1368-1644）
The first Ming emperor, Hongwu, laid the basis of an authoritarian political culture. Despite early expansion, it was an inward-looking state with an emphasis on its agrarian base. Gradual burgeoning of the commercial sector; important changes in the economy and social relations in the latter part of the dynasty; also a vibrant literary scene as represented by publication of the novel Journey to the West.

Qing (Ch'ing) Dynasty（1644-1912）
A Manchu dynasty. Continued the economic developments of the late Ming, leading to prosperity but also complacency and a dramatic increase in population. The acclaimed novel Dream of the Red Chamber was written in this period. Strains on the polity were intensified by a rapid incorporation of substantial new territories. Its authoritarian structure was subsequently unable to meet the military and cultural challenge of an expansive West.

Republic Period（1912-1949）
Weak central government following the collapse of the dynastic system in 1911-12; Western influence was shown by the promotion of "science" and "democracy" during the New Culture Movement. The attempt of the Nationalist government (est. 1928) to bring the entire country under its control was thwarted by both domestic revolts and the Japanese occupation (1937-45). The Nationalists fled to Taiwan after defeat by the Communists.

People's Republic of China（1949-present）
Communist government. The drive for remaking society ended in disasters such as the Great Leap Forward and the Cultural Revolution. Economic reform and political retrenchment since around 1978. 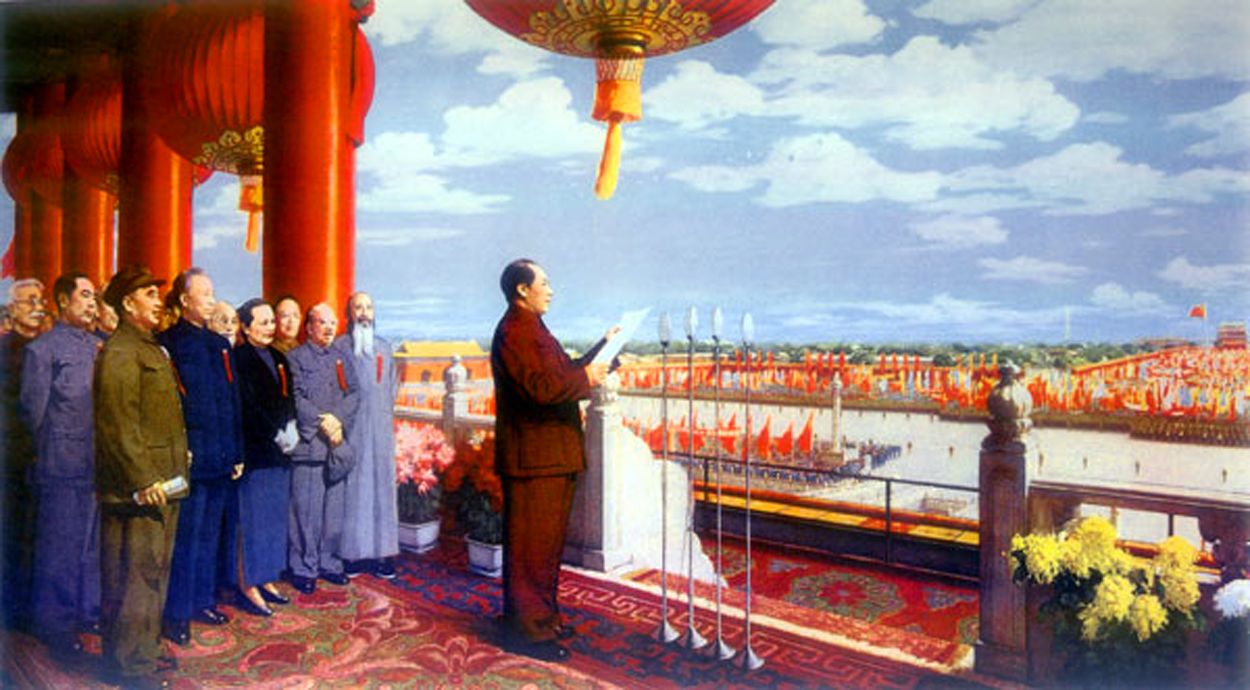