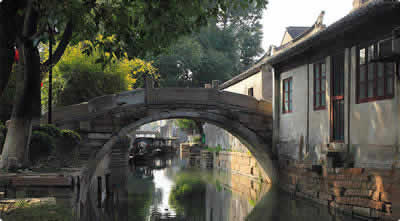 Luzhi Town (甪直镇) is a famous historic old town located in the Wuzhong District, 18 km east of Suzhou, Jiangsu province, China. It was also known as Puli (甫里), an ancient name for this town. Luzhi is famous for its beautiful waterways and ancient bridges, some of the bridges dated back to the Song Dynasty. A walk in the ancient town Luzhi is said to be a walk into history frozen in time, tranquil and serene. 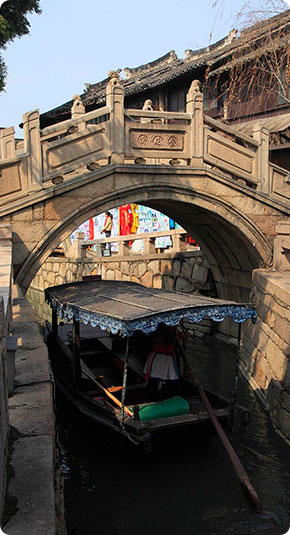 The special feature of the town is its numerous bridges. The one square kilometer (0.38 square miles) town proper once had 72 stone arched bridges built in Song Dynasty, Yuan Dynasty, Ming Dynasty and Qing Dynasty. Forty one of these still exist, each with its own unique style. You will find large multi-arched stone bridges, small single span stone bridges, spacious arched bridges, narrow level-decked bridges, etc. Visiting Luzhi is actually very much like visiting a museum of ancient bridges. There are even more bridges for the area here than in Venice!

Zhengyang Bridge: Built in the Wanli era of the Ming Dynasty (1368-1644), Zhengyang Bridge is the biggest stone arch bridge in Luzhi town. It is known for being the first to receive sunshine in the early morning. Moreover, this old bridge is a vantage point for viewing the whole fascinating landscape of the water town.

Dongmei Bridge: Located on the eastern side of town, Dongmei Bridge is most famous for its unique structure and many Buddhist designs, which are listed in the history of Chinese bridges. It is a completely round bridge, half of which rests above the surface of the water and half of which lies below. The combination of Buddhist engravings and unique circular design makes this a very rare bridge that is definitely worth visiting.

Baosheng Temple: the Baosheng Temple, built in 503 AD, is an ancient temple with a history of over 1500 years. It is home to nine well preserved Buddhist clay sculptures made in Tang Dynasty, some 1000 years ago.

Wansheng Rice Shop: Built in 1910, Wansheng Rice Store is an old-established rice shop that was once operated by two wealthy businessmen and now serves as the rice distribution centre for Luzhi and nearby towns. Many quaint antique agricultural tools are displayed for travelers to view.

Xiao House: It is the most integrated, well-preserved architecture dating back to the Qing Dynasty (1644-1911). Situated on Shangtang Street, Xiao House was built in 1889 and represents a typical southeast China house of a rich family of 19th century. Covering an area of over 1,000 square meters, the house is composed of dozens of rooms with a private lane named Xiao Lane. Visiting the house, you can relive the previous tenants' elegant style of life.

Luzhi Town was named after a Tang Dynasty recluse poet Lu Guimeng who retired in this town. Lu Guimong had a pseudonym: Mr. Pu-li .At that time, Puli consisted of two districts: Puli and Liuzhi. Liuzhi meant that there were six straight rivers in the town. In the Suzhou dialect, "liu" was pronounced as "lu", and 六直 pronounced as Luzhi. At the end of the Qing Dynasty, Puli was changed to Luzhi town ship of Yuanhe County. Luzhi is one of the best preserved old towns in China, along with its old canals and streets. In 2003, Luzhi together with Tongli and Zhouzhuang were listed in the tentative list for UNESCO World Heritage Sites. With the rapid modernization of China, large number of historical towns disappeared under the bulldozers, with only a handful of well-preserved historical townships remaining today. In 2004, Luzhi was also awarded a Township Preservation Award by UNESCO.