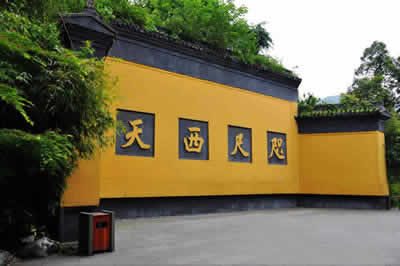 Overview
The Lingyin Temple, west of the lake, stands at the foot of the Beigao Peak and faces the Feilai (Peak That Flew Here) Peak across a stream. With many old trees, groves of bamboo, and quiet and beautiful surroundings, the Lingyin Temple is one of the most famous temples south of the Changjiang (Yangtze) River.

Lingyin temple, commonly translated as "Temple of the Soul's Retreat" is one of the largest and wealthiest temples in China. Despite some damage inflicted by red guards during the Cultural Revolution, the temple and grounds escaped much of the wholesale destruction that other temples in China suffered because of the protection of Premier Zhou Enlai. Today the temple is thriving, though most of the thousands of visitors who come do so for sightseeing and not for religious reasons.

History of Lingyin Temple
The presence of a temple on this site can be traced back to the Eastern Jin Dynasty (317 - 420AD) when, according to local legend, Huili an Indian monk came to the area where he was inspired by the spiritual nature of the scenery to be found here. To his mind this had to be a dwelling of the Immortals and so he gave the temple a name "Ling Yin (Temple of the Soul's Retreat). The Chinese name is translated into English as either "Temple of the Soul's Retreat' or 'Temple of Inspired Seclusion' for the setting has a quiet and beautiful grandeur that encourages a feeling of peace and for contemplation.

From its inception, Lingyin was a famous monastery in the Jiangnan region. At its peak under the Kingdom of Wuyue (907-978), the temple boasted nine multi-storey buildings, 18 pavilions, 72 halls, more than 1300 dormitory rooms, inhabited by more than 3000 monks. Many of the rich Buddhist carvings in the Feilai Feng grottos and surrounding mountains also date from this era.

During the latter Southern Song Dynasty, the monastery was regarded as one of the ten most important temples of the Chan sect in the Jiangnan region. However, its prominence has not saved the temple from marauders. It has been rebuilt no less than sixteen times since then. The current buildings are modern restorations of late Qing buildings. During the Cultural Revolution, the temple and grounds suffered some damage at the hands of Red Guards. However, they escaped large scale destruction partly because of the protection of Premier Zhou Enlai.

Today the temple is thriving as a destination for both pilgrims and tourists. It is regarded as one of the wealthiest monasteries in China, and regular pilgrims have included former paramount leader Deng Xiaoping.

Main Buildings Of Lingyin Temple :
The main axis of Lingyin follows a traditional Song dynasty five-hall Chan sect structure. The main axis stretches up the Lingyin Hill. However, the five-hall axis is a recent recreation. Only the front three halls are a part of the Qing dynasty axis.

The hillside to the south of the temple is also famous as a site of old Buddhist caves and rock carvings. Many of these date back to the time when the temple was first founded and a great many were carved during the blossoming of Buddhism during the Tang dynasty. 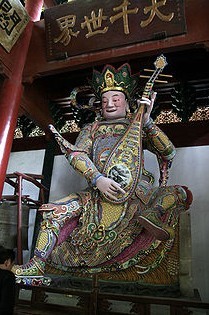 Hall of the Heavenly Kings(???)
The formal entrance of the temple is the Hall of the Heavenly Kings (Chinese: ???; pinyin: Tianwáng Diàn). This hall is a double-eaved building. The front of the building carries a plaque (Chinese: ????; pinyin: Yúnlín Chán Sì; literally "Chan temple of the Clouds and Forests"), written by the Kangxi Emperor. The principal statue in this hall is that of the Maitreya Buddha in his manifestation as the cloth bag monk, or the Laughing Buddha. At the back, facing up the hill, is the Skanda Buddha, or Weituo as he is known in Chinese. This statue dates from the Southern Song Dynasty. Arranged along the left and right are the Four Heavenly Kings. The ceiling is ornately painted and decorated with phoenixes and dragons.

Visitors to the temple are often impressed by the size and majesty of the entrance hall and its statues of the heavenly kings. Indeed, the hall of the Heavenly Kings at the Lingyin Temple is as large or larger than the main hall at many temples, reflecting its status as the centre of Buddhism in south-eastern China.

The Hall of the Heavenly Kings is the formal entrance to the temple. However, this entry has been closed in recent years, with visitors funneled instead through side doors, where separate ticket offices are set up for admission to the temple.

Grand Hall of the Great Sage (????)
The second and principal hall is the Mahavira Hall, or the Grand Hall of the Great Sage (Chinese: ????; pinyin: Dàxíong Baodiàn). It is separated from the Hall of the Heavenly Kings by a large courtyard, featuring a raised lawn bordered with trees. To the left of the courtyard stands the Hall of the Five Hundred Arhats. The Grand Hall of the Great Sage is triple eaved and stands 33.6 metres tall. It houses, as is traditional, a statue of Shakyamuni, the historical Buddha. The present statue was carved in 1956 from camphor wood in Tang Dynasty style and coated with 60 taels of gold. It is the largest wooden Buddhist statue in China. At the back of the main statue is a statue of Guanyin, backed by a large screen that features the carved images of some 150 Buddhist personalities, including the pilgrims of the Journey to the West, Daoji, and arhats. Arranged along the sides of the hall are images of the 18 principal arhats, and other prominent Buddhists. The interior of the hall reaches about 30 metres, with a gold-painted ceiling featuring base relief images of traditional Buddhist symbols.

Sutra Library (???)
Uphill from the Hall of the Medicine Buddha is the Sutra Library (Chinese: ???; pinyin: Cángjing Lóu). This, and the Huayan Hall behind it, were built from 2000 to 2002 to re-create the five-hall main axis. The Sutra Library does not house a major statue and is not open for worship.

Huayan Hall(???)
The fifth and last hall on the main axis is the Avatamsaka Hall, or Huayan Hall (Chinese: ???; pinyin: Huáyán Diàn). Also built in 2002, this hall houses statues of the three sages of the Avatamsaka Sutra, known as the Huayan Sutra in Chinese - Shakyamuni, Manjusri, and Samantabhadra. 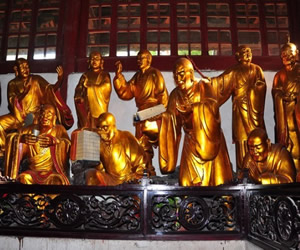 Hall of the Five Hundred Arhats (?????)
The Hall of Five Hundred Arhats (Chinese: ?????; pinyin: Wubai Luóhàn Táng), also a modern addition, faces onto the western side of the court yard in front of the main hall. The building has a complex floor plan, shaped like a Buddhist swastika. Along the arms of the swastika are arranged the five hundred arhats as slightly larger-than-life bronze statues. Each statue is seated on a unique ornate seat. At the centre, where the arms of the swastika join, stands a bronze canopy housing statues of four bodhisattvas representing the four cardinal directions. This is currently the tallest solid bronze structure in the world.

Vegetarian Restaurant in Yinglin Temple:
To add a final memorable touch to your visit, it is very pleasant to dine at the Ling Yin Vegetarian Restaurant located near to the Temple. The vegetarian dishes on offer are typical of the Chinese culinary style and it is little wonder that in such a setting the excellent repast is frequently regarded as 'food for the gods'.

Why is the Lingyin Temple special?
Lingyin Temple is one of the most significant and beautiful Buddhist monasteries in China. "Ling-yin", meaning "Soul's Retreat" in Chinese, is indicative of its peaceful natural surroundings.

Lingyin Temple Highlights
Ling Ying Temple as a significant Buddhist temple, it holds an intensive collection of artifacts and treasure related to the religion. Thousands of people come here every day to worship and find peace.

Buddhist Architecture
The Hall of the Heavenly King has a statue of Maitreya, the smiling, belly-baring Buddha, seated in the middle. The main hall, not far away, displays a prominent statue of Sakyamuni who founded Buddhism.

One Thread of Heaven
On the ceiling of the main grotto, which is dedicated to the bodhisattva Guanyin, is a crack in the rock that stretches up to its surface. If one stands in a single position, a tiny sliver of sunlight can be seen. This phenomenon is described as seeing "one thread of heaven".

Culture Relics
The Temple contains an important collection of Buddhist literature together with many other treasures. Therefore, it is a great storehouse of information for those who wish to study aspects of Chinese Buddhism in detail.

The palaces, pavilions, and halls together with their many figures of Buddhist deities represent a splendid and unique collection of architectural and artistic cultural relics. The various buildings and pagodas date from the Southern Song, Ming, and Tang Dynasties.

Among the ancient writings are scriptures written on pattra leaves, the Diamond Sutra copied by Dong Qichang in the Ming Dynasty, and a wood cut edition published during the Qing Dynasty.

Tour Lingyin Temple with Hangzhou Private Tour
We design private and tailor-made Hangzhou Tours customized to your style of travel at affordable local prices.  We will provide a private & spacious car and a local professional tour guide with over 5 years guiding experience only work for you or your group. Transport, ticket, and dining (We find the most authentic dishes popular with locals) all we will arrange for you according your requirements. Please check our most popular Hangzhou Tours including The Hangzhou Westlake as below: