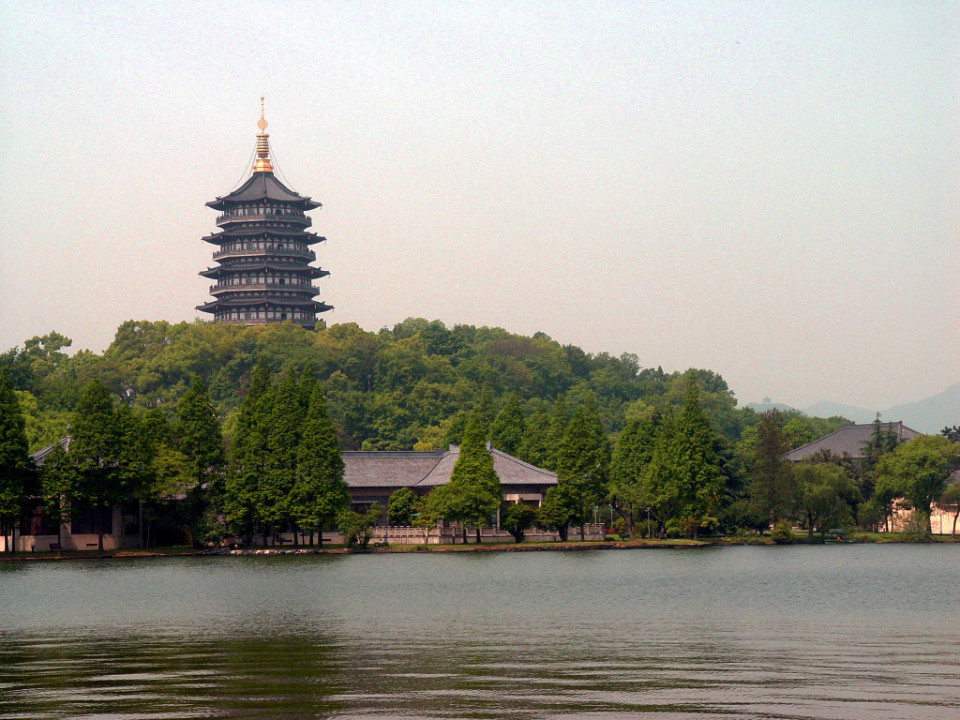 Overview
Leifeng Pagoda is a five story tall tower with eight sides, located on Sunset Hill south of the West Lake in Hangzhou. Originally constructed in the year AD 975, it collapsed in 1924 but was rebuilt in 2002, since when it has been a popular tourist attraction.

Lei Feng pagoda was constructed in 975 at the order of Qian Hongchu, the King of Wuyue Kingdom to celebrate the birth of a son by one of his favorite concubines - Huangfei. It was therefore called Huangfei Pagoda at that time. Since the pagoda was located outside the west gate of the city, it was also known as the Brick Pagoda of West Gate. All those names, however, have been forgotten over the years; only the name Leifeng Pagoda has been passed on from generation to generation.

History & Background
Leifeng Pagoda was an octagonal, five-storeyed structure built of brickand wood. The body of the pagoda was made of brick, but the eaves, balconies, inside landings and balustrades were made of wood. Stones with the Huayan Scriptures inscribed on them were inlaid on the inner walls of the pagoda. There used to be sixteen sculptures of vajra arhats at the foot of the pagoda, but they were later moved to Jingci Temple.

The pagoda became a household name in China thanks to the popular folk tale, "The Legend of the White Snake", a touching love story about a girl who changed into a snake and a young man. The story has been repeatedly adapted for traditional operas and also for modern movies and TV series.

In the story, the couple are separated by an evil old monk with magical powers, who had the snake girl imprisoned under the Leifeng Pagoda for years. She is finally rescued by her son who caused the collapse of the pagoda.

In real life, the pagoda also had a sad history. During the Yuan Dynasty it was a magnificent building "of ten thousand chi" standing "aloft as if in midair." It suffered a most severe disaster during the Ming Dynasty. During the Jiaqing years (1522-66) Japanese invaders set fire to the pagoda and burned the coves, balconies, balustrades and steeple to ashes, leaving only a brick skeleton. Later some superstitious and ignorant people often took bricks from the pagoda in the belief that the abrasive powder of the bricks was a magic remedy that could cure all diseases and keep a foetus from aborting. Others stole Buddhist scriptures from the pagoda in order to make money. Finally, in August 1924 the foot of the pagoda was dug hollow and other parts of the pagoda were so severely damaged that the ancient pagoda suddenly collapsed.

Lu Xun (1881--1936), one of the most prestigious figures in contemporary Chinese literature, wrote an article declaring the collapse of the Leifeng Pagoda was a major blow to the feudalistic social order that had ruled China for thousands of years. The article was later included in a textbook for Chinese students.

Chinese experts have long debated whether or not the Leifeng Pagoda should be rebuilt. A strong argument for the pagoda's rebuilding was that it had great archaeological value and was also an ancient architectural masterpiece.

Originally of Buddhist architecture, the Leifeng Pagoda was said to have once housed the hair and skeletal remains of Sakyamuni, the founder of Buddhism. In March of 2001, a number of ancient Buddhist relics were unearthed from the underground chamber of the pagoda.

In October 1999, a special committee was organized to study academic papers and correlated materials to prepare for reconstruction of the tower. After careful study, the committee chose to set up a steel structure similar to the old tower over at the original site of pagoda. The new one is designed to be a five-storied pavilion inlaid with brick and upturned eaves.
In November, 2000, the Hangzhou Municipal People's Government declared that it was going to rebuild Lei Feng Pagoda. And the construction completed in October, 2002. 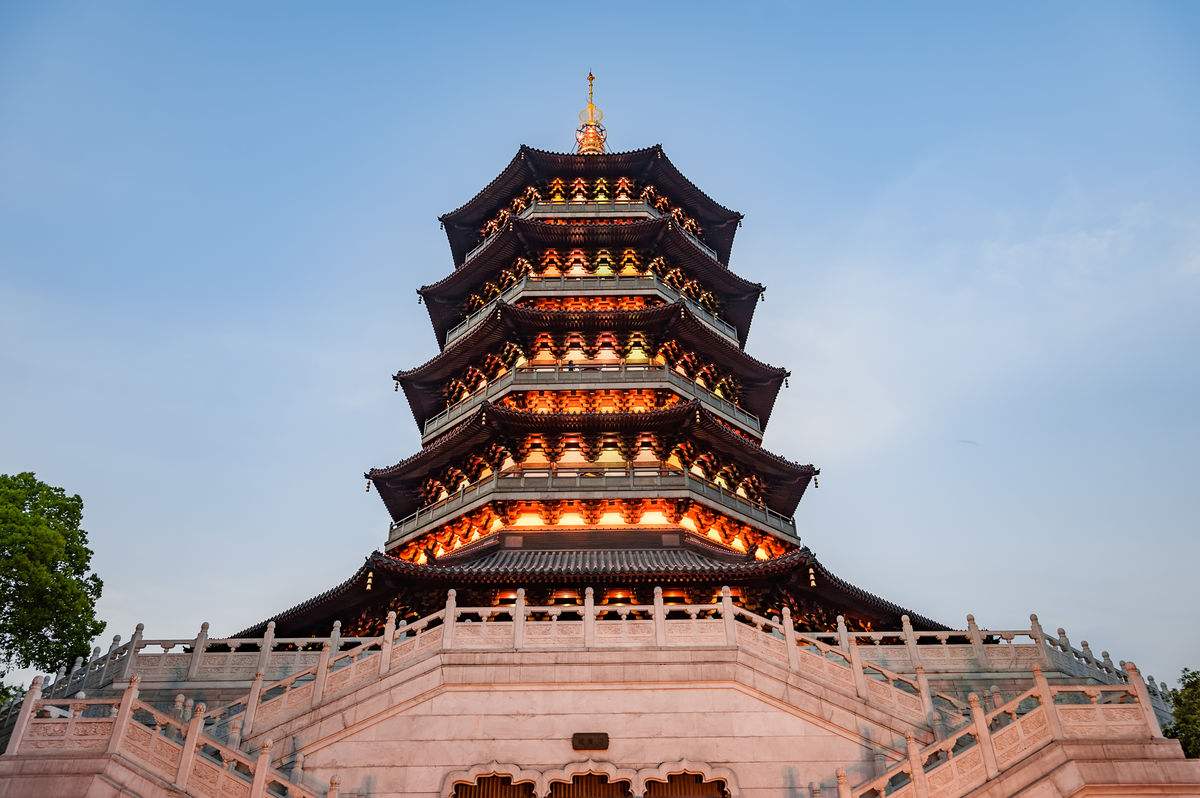 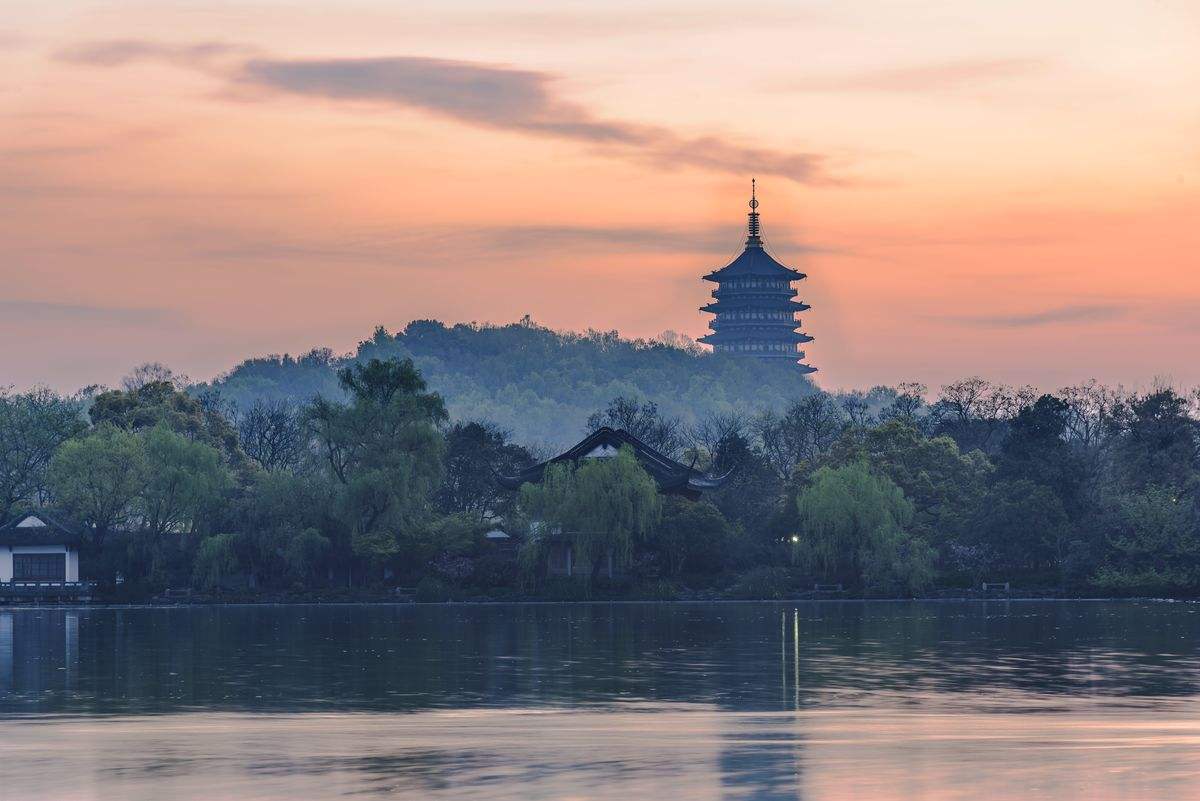 Tour The Leifeng Pagoda with Hangzhou Private Tour
We design private and tailor-made Hangzhou Tours customized to your style of travel at affordable local prices.  We will provide a private & spacious car and a local professional tour guide with over 5 years guiding experience only work for you or your group. Transport, ticket, and dining (We find the most authentic dishes popular with locals) all we will arrange for you according your requirements. Please check our most popular Hangzhou Tours including The Leifeng Pagoda as below:

Next: Bamboo Lined Path at Yunxi